Earlier this year, I wrote a series of stories about a fictionalised version of my mate “Robbo”. These stories became increasingly silly and forumulaic, until I had the idea of feeding them through a Markov chain to generate a new story. I then routed this as audio through my Eurorack modular gear to make bizarre “not really music”.

Earlier this year, I wrote a series of stories about a fictionalised version of my mate “Robbo” (primarily written to wind up Charlotte). These stories became increasingly silly and forumulaic, until I had the idea of feeding them through a Markov chain to generate a new story. It came out VERY silly! I liked it.

What is a Markov chain?

I dunno, it’s some AI thing, part of our inevitable downfall as a species. A proper AI spod would probably correct me on this, but it takes a bunch of “stuff” and can be used to generate “artificial stuff” that’s like the “real stuff”. Anyway, science bits over, I used it as a nonsense pipeline.

Eurorack - a shiny pit of knobs to throw money into 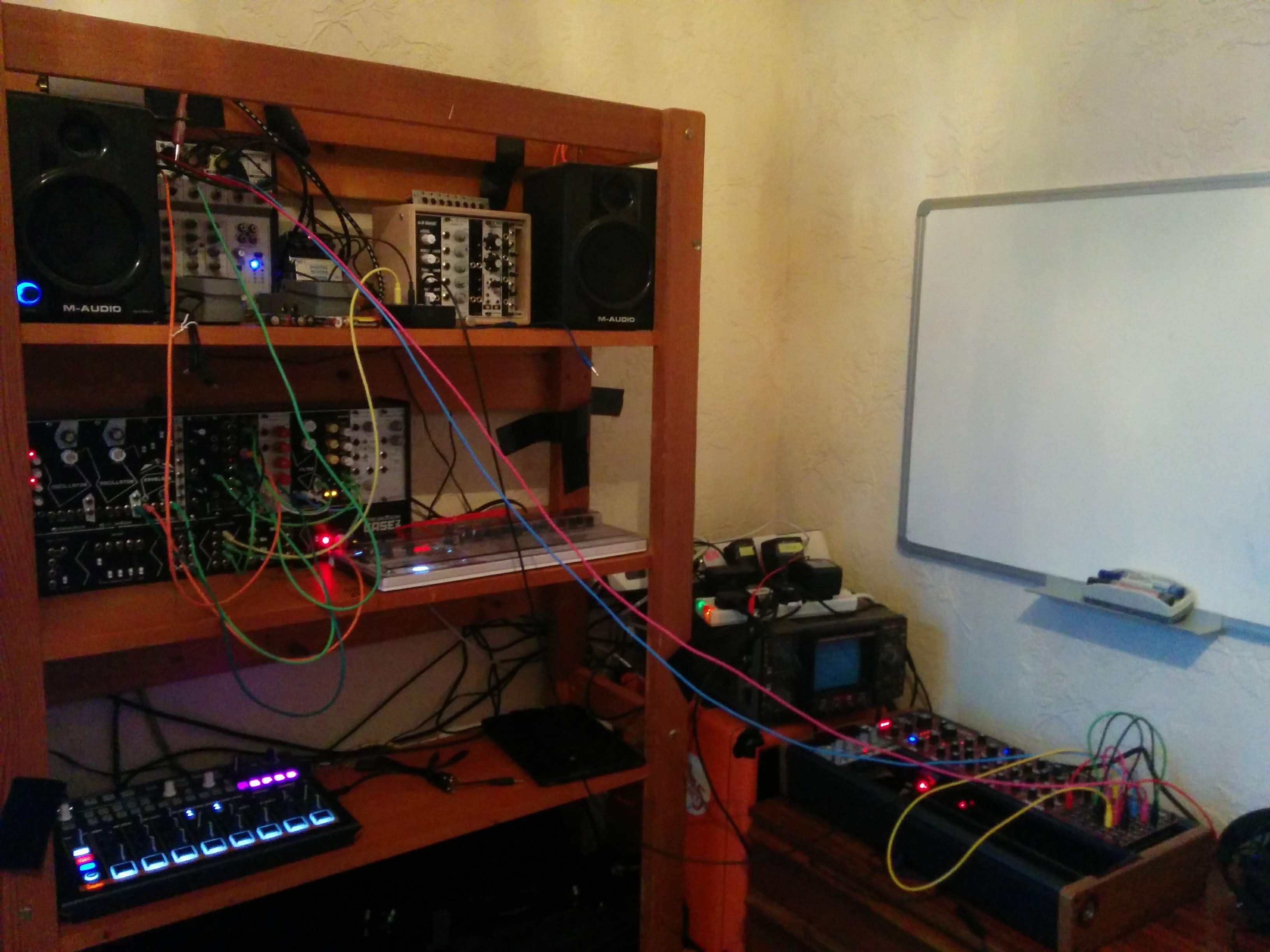 I have another hobby - Eurorack audio synthesis. It’s like crack for middle aged former musicians (my band broke up over a year ago now - sadface). It’s the easiest way of spending yourself into poverty. It makes sounds based on voltages. Collect ‘em all! Instead of buying a synthesiser, we buy individual modules and wire them up ourselves.

I have a Soundcloud under the name of Shinbones Man, and all the “songs” I produce are (a) made without computers and (b) cranked out in 30 minutes or less. Seriously, I’ve got kids, I don’t have time to labour over songs! Also, it is more fun having the time limit because otherwise I will obsess about the track and never finish anything!

Eurorack is quite a biomechanical hobby. It’s hi-tech in a way, but conversely, there’s no computer involved in my audio production setup (it just records at the end), I do everything live and on the fly. Likewise, the Markov generated story is based on things I wrote but a computer’s take on that. So, I thought - “can I route this nonsense through my eurorack gear?”

So, I converted the Markov story to audio using Apple Say, and dragged the clips into Garageband, then routed them out through a stereo splitter I built and through my modular gear - left side through my main rack, right side through my Neutron.

Patchin’ up: my signal path

The “patch” (way I cabled up my modules) bears a little resemblance to this terrible diagram I made (I make diagrams all day at work, I am not fussing over ‘em on my blog!): 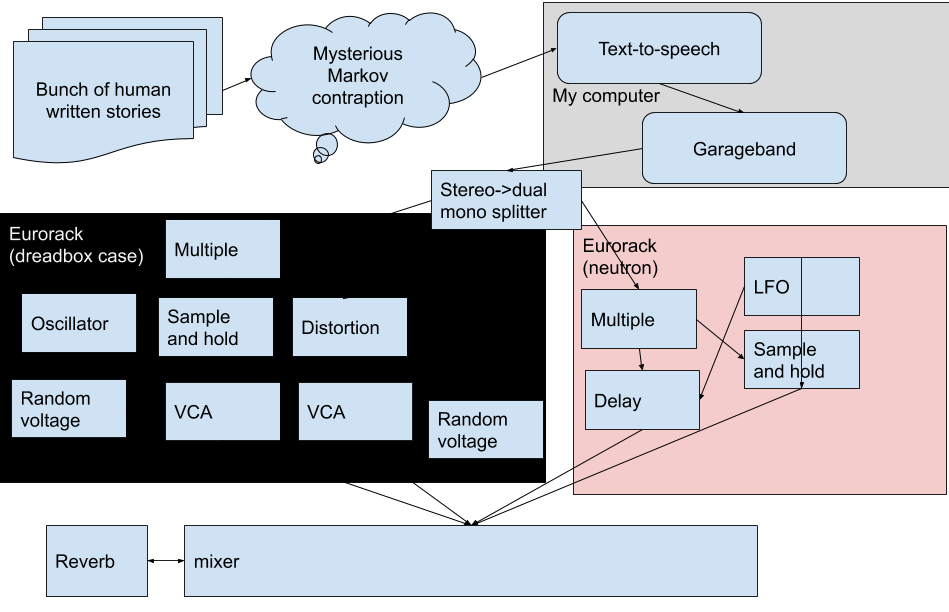 What I was essentially doing was setting up automation via envelopes and LFOs to modulate the volumes, sample rates, amount of distortion and delay time of 4 separate signal paths. 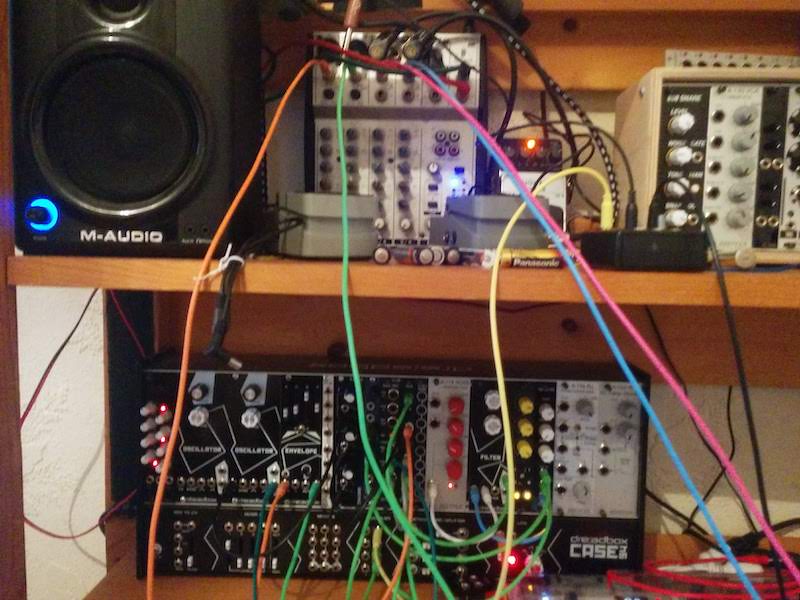 Does it sound any good?

Not really! Some interesting bits but mostly annoying.

To me, this is just a hobby, but sometimes I get fun ideas like this, and I just have to see how they pan out! 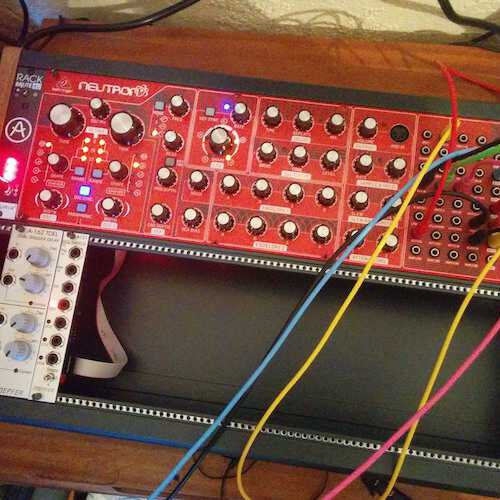