In Pixelville Pensioners, you play as an 8-bit sprite trying to build a home for your friends…

This took many months of hard work! Thanks to all testers. Thanks to your input, we have the map, enhanced conversations, a better ending, and the game has fewer bugs!

Thanks to Samba Lucas for contributing the music for the game.

The character’s walk-to animation sometimes gets stuck and fails to transfer to another screen. I think it’s where the character walks and the threshold to change screens is never reached. I don’t consider this a severe bug, in fact it’s kind of cute. If it happens, just click to walk to somewhere else and try again.

In Pixelville Pensioners, you play as an 8-bit sprite trying to build a home for your friends. Characters from classic ZX Spectrum games like Manic Miner, Chuckie Egg, New Zealand Story, Skool Daze and Sabrewulf help you on your quest.

I wanted to make a retro game, but didn’t want to make a remake. I admire people who remake games, but I don’t think that I could do it – I’d get bored quite quickly! In fact, boredom was the biggest challenge in writing this game – as soon as I had solved the technical problems (how to make Sabreman follow the cursor, implementing tree-based conversations, scripted events, et cetera) I found it hard to remain interested at times!

I always wanted to make a graphic adventure – my teenage years are littered with such games written in QBasic. I decided to make a point-and-click adventure, influenced by Monkey Island and the Sierra adventure games. I started this game soon after completing Inverse Shooter, and it grew and grew.

The engine allows an avatar to move around multiple screens peopled with characters and littered with objects, all of which can be interacted with. The engine is therefore infinitely expansible.

I sincerely hope that you enjoy the game.

In a tragic move, Adobe killed Flash. So, to play this game, I recommend Ruffle. On my Mac, this game seems to work OK in Ruffle. 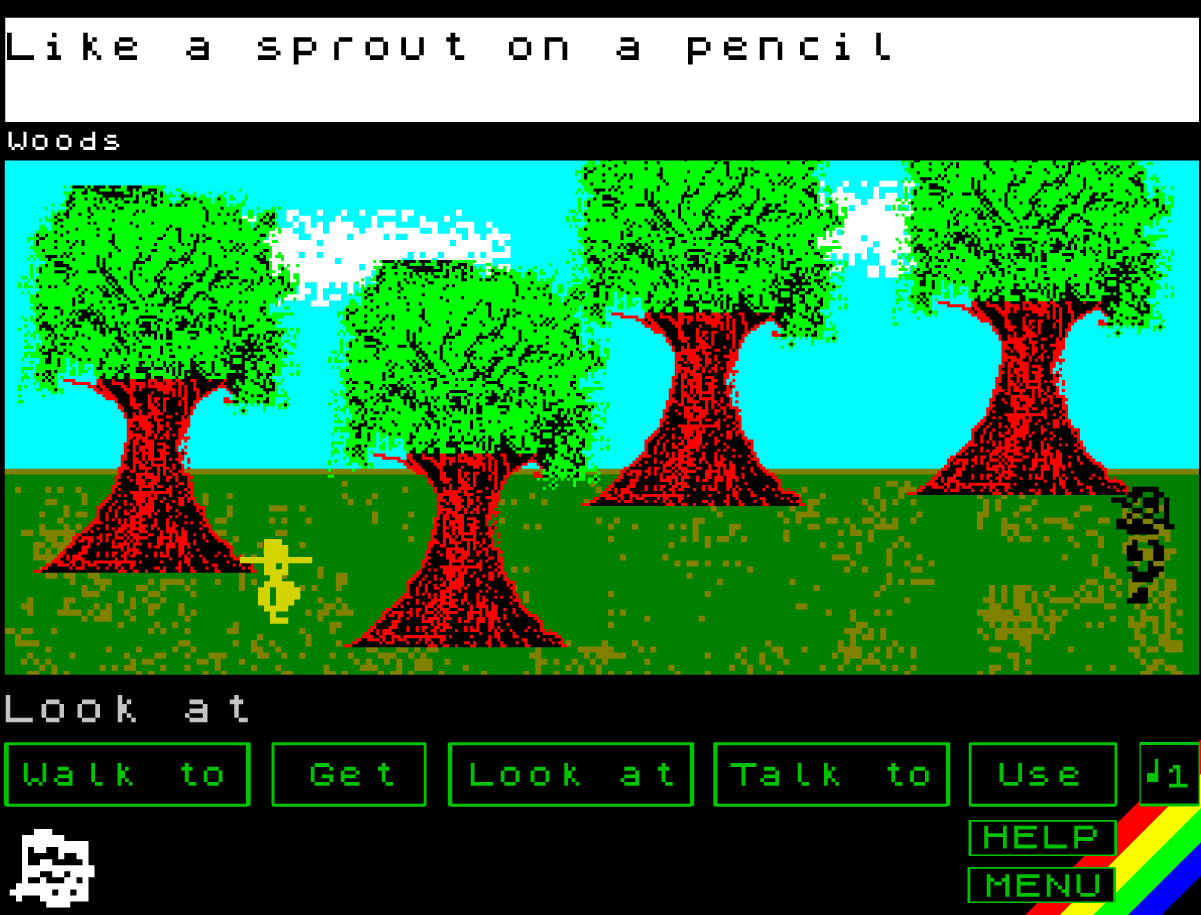 In case you do have Flash installed somehow, here it is below:

Most of the tracks were by Samba Lucas, but one of them was mine, which I think I made on a ZX Spectrum tracker? I remember being very keen to make it era-accurate!

Older:
BeatMuppet - Let's Nobody Give Up